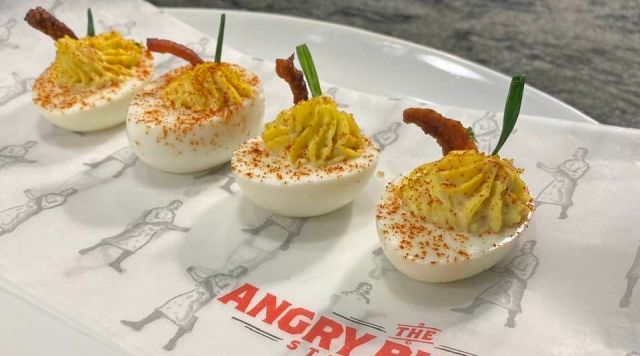 Social Hour Menu Spotlight!
The Angry Butcher The Delicious History of Deviled Eggs
The ancient Romans began the deviled egg tradition! In Rome, thousands of years ago, eggs were boiled, then slathered with spicy sauces of varying kinds; they were served as an appetizer at the beginning of a meal, usually at the home of wealthy citizens who could afford the eggs and the cooks to prepare them. There is even a reference to deviled eggs in their primitive form in an ancient work of fiction called “Satyricon.” In this book, a wealthy Roman citizen throws a banquet where the meat of songbirds is marinated in peppered egg yolk and stuffed into the white part of boiled peahen eggs.

Wherever they started, we love where Deviled Eggs have landed here on The Angry Butcher's Social Hour Menu, hand-crafted with diced onion, zesty mustard aïoli, applewood smoked bacon and chives.